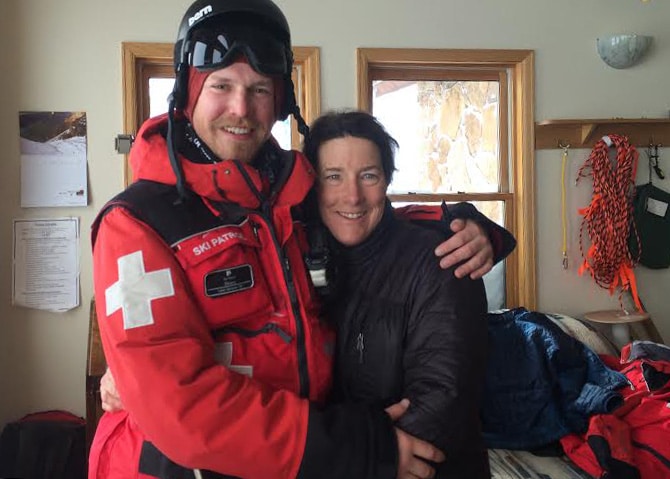 It was a snowy day in January. The kind of day that snow worshippers pray for. Conditions that persuade you to call out of work and head to the hill. Beau Sibbing and his best friend were skiing in a remote area of Breckenridge Ski Resort when tragedy struck. A high-speed impact left Beau hanging from a tree and bleeding from his head, with an imminent traumatic brain injury. Despite the steep and challenging terrain, the Breckenridge ski patrol rescue team was soon on the scene.

Karen Lapides, lead paramedic on ski patrol, arrived at the accident prepared to make critical decisions that would save the young man's life. Beau’s condition temporarily improved before rapidly declining, a confusing reaction known as a lucid interval. Faced with a difficult extraction from a remote location while attempting to stabilize their trauma victim, patrollers prepared for the worst.

Assessing the trauma, Karen recognized Beau’s injuries had a high potential to worsen while he was enroute to the ER. She made the crucial decision to start an IV to deliver critical meds and quickly intubated Beau in the event he stopped breathing. As predicted, Beau’s condition started to deteriorate. But the proactive decisions made by Karen and the ski patrol team ultimately saved Beau’s life.

“I’m not exactly sure what happened,” says Beau, “Obviously, I don’t remember anything. I’ve been able to meet everyone who was on the scene that day. It’s all these little pieces of the puzzle that have come together to create a pseudo memory.”

A heavy winter storm prevented Flight for Life from being able to assist in the rescue, but the ambulance made it to St. Anthony’s Hospital in Lakewood, CO in 45 minutes. The surgeon on call performed a life saving surgery and Beau remained in a coma for four days. When he awoke in a world of pain, he had a long, uncertain recovery ahead of him.

“The first time I met my doctor he came into the hospital room and told me, ‘you are the definition of a miracle’.” says Beau. “When a brain surgeon uses the word miracle, it really means something.”

Almost four weeks later, Beau was released from the hospital. Initially, doctors were unsure of how his brain would react to the trauma and the extent of his recovery was unknown. Beau said he’d like to earn an EMT certification at Colorado Mountain College. His doctors advised him to hold off.

“They weren’t sure what my brain was doing or how much retention I was going to have.” says Beau. “I wasn’t able to work or drive, and I was relearning how to walk. I was bored, stir crazy and I wanted my life back.”

“After the accident, I had a lot of time to think and I made up my mind.” says Beau. “I don’t remember any of the accident but I was realizing that paramedics saved my life. I felt like I had to do my best to try to give someone else that opportunity.”

Less than one year after the accident, Karen Lapides, also an instructor for Colorado Mountain College’s EMT and paramedic program, was taking roll call in an EMT-Basic course. When she came to Beau’s name, she recognized it immediately. To see him recovered with the capacity to take college classes was powerful.

“She saved my life but I didn’t know that at the time.” reflected Beau. “She called my name and said, ‘I took care of you.’ It was a huge moment. How do you say thank you for something like that?”

Karen’s teaching style, a combination of hands-on learning and lecture through experience, was what Beau needed to succeed. Colorado Mountain College’s EMT program engaged him, motivating him to follow his dream and join the ranks of his heroes on Breckenridge Ski Patrol.

“At that point, I wanted to be a part of what put me back on the mountain.” says Beau. “I knew we were opening up peak 6 and I thought Breckenridge might need extra patrollers. Karen is the medical trainer for Breckenridge Ski Patrol, so I reached out.”

The next season Beau skied hard every day to condition himself into shape for the demands of ski patrol. One and a half years after the accident that almost claimed his life, Beau Sibbing was accepted into Breckenridge ski patrol. Today, he works alongside his heroes and is able to help others the way patrol did for him on that fateful day in January.

On the anniversary of his accident, Beau and his rescuers returned to the scene and went through the events leading up to his injury. It was a humbling experience and an emotional day. But now his perpetual gratitude and appreciation shine through in his daily work on the patrol.

“The real story here is the Breckenridge Ski Patrol and their work on the slopes.” says Beau. “We get some hard calls, occasionally calls where there’s not much hope. I like to remind patrollers that I’m alive because of their efforts. Yes, we may have rough days, weeks, or seasons but we also do really amazing things for people. Sometimes we save lives.”