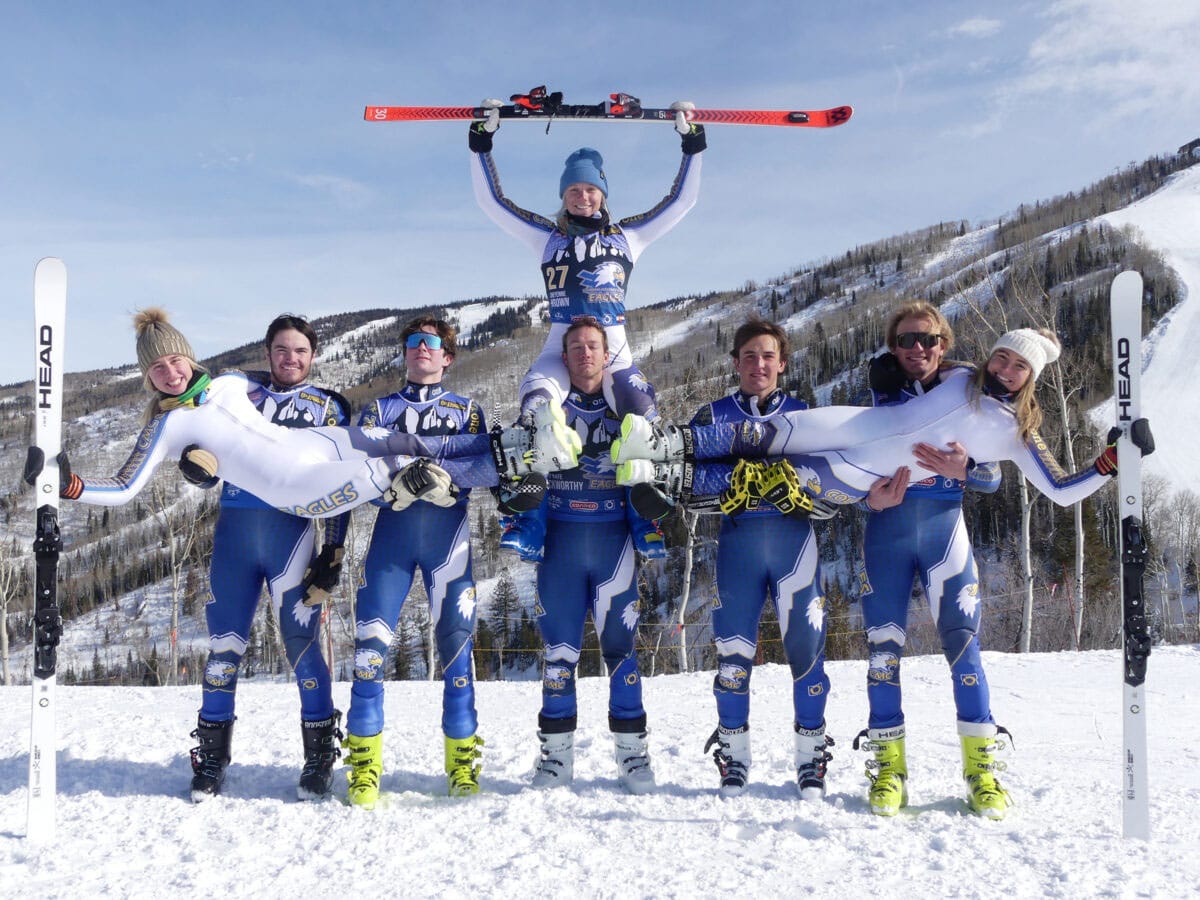 The Colorado Mountain College Eagles alpine ski team, based at the college’s Steamboat Springs campus, is flying high coming off an unprecedented win and a number of strong performances at a series of Rocky Mountain Intercollegiate Ski Association races during the past two weeks.

At the Feb. 17 women’s giant slalom, CMC’s Ainsley Proffit took first place after two runs, winning her first college race as well as her first college podium. Proffit, with an overall time of 1:44:98, edged by second place finisher Westminster College’s Julia Tovivianen at 1:44:99, and beat out a field of over 50 other finishers.

“It was pretty exciting when Ainsley took the win by such a slim margin,” said Scott Tanner, the team’s head coach. “With a number of athletes just returning from the Olympics, Ainsley really had to attack to come up with the win.”

On Feb. 18, Proffit secured her second podium with a second-place finish, while her teammate Cheyenne Brown landed in 29th place.

“I couldn’t have asked for a better race series,” Proffit told Ski Racing following her Copper results. “I love being part of the CMC ski team.”

In the men’s giant slalom at Copper, four CMC racers landed in the top 35 finishers out of a field of over 60. Among them Matt Macaluso took 22nd, Jack Reich 23rd, Nick Unkovskoy 27th, and Henry Hakoshima 31st. Macaluso again led five CMC Eagle men into the top 35, with a finish in 15th, Sergi Piguillem in 19th, Unkovskoy in 22nd, Jack Reich in 23rd and Hakoshima in 34th.

“The whole team has been really charging and it is showing in our results,” said Tanner.

The team followed their strong performances with slalom racing at Keystone on Feb. 21, and has returned to Feb. 23-26, hosting the RMISA regionals at Steamboat Mountain Resort, which featured giant slalom races at Mt. Werner on Wednesday, followed by slalom races on Thursday and Friday and a parallel slalom on Saturday.

On Feb. 23, the team rallied again at Steamboat to place strong finishes. In the men’s races, Unkovskoy placed 9th, Macaluso was 10th, Piguillem was 18th, Will Cashmore was 27th and Hakoshima placed 34th. On the women’s side, Proffit came in at 13th, Mary Kate Hackworthy was 23rd and Brown, 34th.

“We are coming into this week's regionals, on our home hill in Steamboat with a good head of steam,” said coach Tanner.

“This is the strongest CMC Eagles team we have had in a long time, and we’re hungry for more,” added Brown about her and her teammates.