Professor of English and Literature
719-486-4240 | jrunyon@coloradomtn.edu 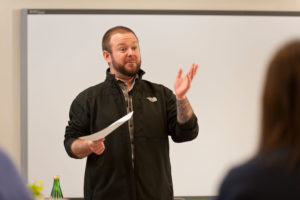 Jeffrey Runyon has been teaching at Colorado Mountain College Leadville since 2008. He has committed his time to teaching English—composition, literature, poetry, creative writing, and more. Jeffrey was named Full-time Faculty of the Year in 2009-2010 and was the Faculty Senator for the Leadville campus from 2008-2012.

Jeffrey Runyon has been on CMC’s International Programs Committee since 2008, and lead the study abroad trip to Ireland in 2013.

“The encouragement, understanding, and guidance imbued within Jeffrey’s style of teaching urges students to consider the world around them in a broader sense—to think and to question–using the subject matter as a catalyst for expanding and illuminating our minds.” –Anna Wolner

“Epic Literature was my favorite class at CMC and Jeff made it an incredible experience!” –Zach Vazquez