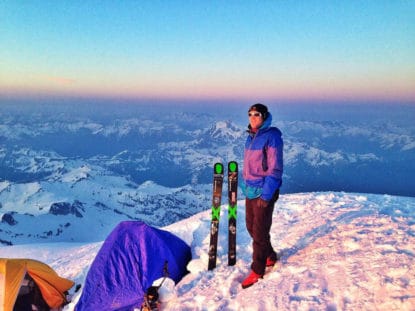 
Dr. Jon Kedrowski is a speaker, author, mountaineer, expedition leader and trekking Guide. According to his website:

"Kedrowski has a Ph.D. in Environmental Geography, Weather, and Climate. He grew up in Vail, Colorado where he has climbed over 1,000 different Colorado peaks, including hundreds of ski descents, (Skiing each of Colorado's 14,000' peaks and about half of the 637 CO 13ers). He has climbed 6 of the 7 continental summits, including summiting Mt. Everest in 2012 & 2019. His training ground also included the mighty Mount Rainier volcano in WA, which he has climbed over 25 times and skied on numerous occasions.

"His expeditions to Mt. Everest in recent years (2012, 2015, 2018, & 2019) have been featured on Discovery Channel, Smithsonian, NBC, Dateline NBC, CBS, ABC, Fox, and CNN. On April 25, 2015, Jon was at Everest Base Camp in Nepal when a devastating 7.9 magnitude earthquake struck. All summit attempts were aborted but Jon was able to assist the Nepalese people with rescue efforts."