Glenwood Canyon is geologically every bit as fascinating as its more famous North American neighbor, the Grand Canyon. Photo: Jeremy Joseph, graduate of the Colorado Mountain College Professional Photography Program.
How was the canyon formed? The ancestral Colorado River flowed 2400 feet above its current location more than three million years ago. Inch by inch, it carved through and exposed sedimentary layers not visible from the panorama of Glenwood Springs itself.

This erosion exposed 1700 million years of formations as old as the Precambrian era rocks you see at various points along the highway and bike path in the Canyon.

By some estimates, this rate of erosion occurred at about 10 inches per every thousand years.

This canyon has it all. Glenwood Canyon contains all three types of rocks: sedimentary, igneous and metamorphic. As you travel through the canyon, be sure to stop at one of its many rest areas and use these photos as your guide to identifying the formations: 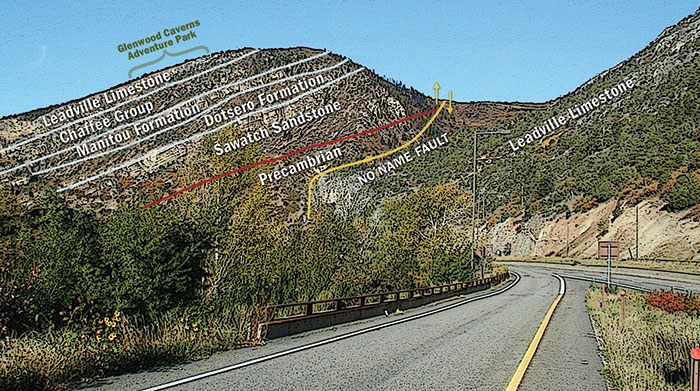 Taken from the east No Name Exit, looking west. Slip-slidin’: Do you see where the Leadville Limestone on the left and right don’t line up? The break was caused, as in many places in the canyon, by faulting. The No Name Fault created the vertical displacement of 1500 feet, lining up the Leadville Limestone with Precambrian (middle of photo). The faulting affected the development of the saddle you see. 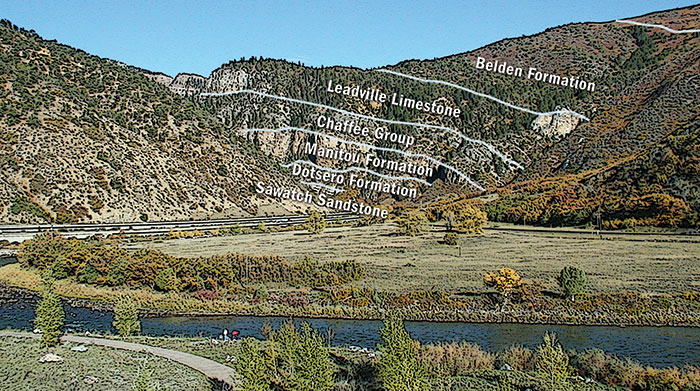 View from the No Name Rest Stop, looking east. The key characteristic of sedimentary rocks are their distinct, stratified layers. The layers were built by cemented sediment consisting of clays, sands, gravels or dissolved sediment of lime and gypsum. See the geologic time scale to find out when these layers were formed. 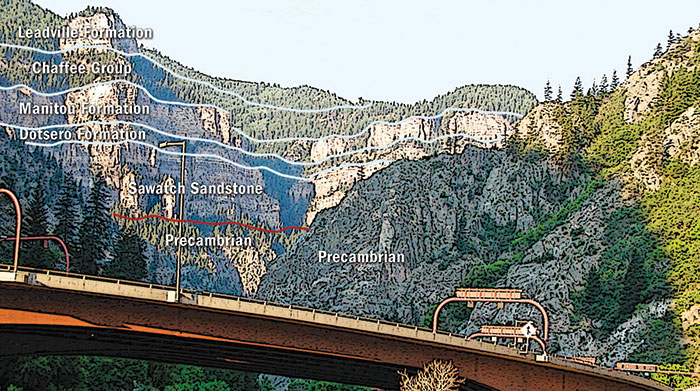 Taken at the Hanging Lake Exit. Where’s the missing rock? Where the Sawatch Sandstone rests on the Precambrian (red line) is the Great Unconformity. The surface between the two marks 1,200 million years of missing rock wiped away forever by erosion. The Great Unconformity was first described in North America by John Wesley Powell in 1869 in relation to the same phenomenon in the Grand Canyon. 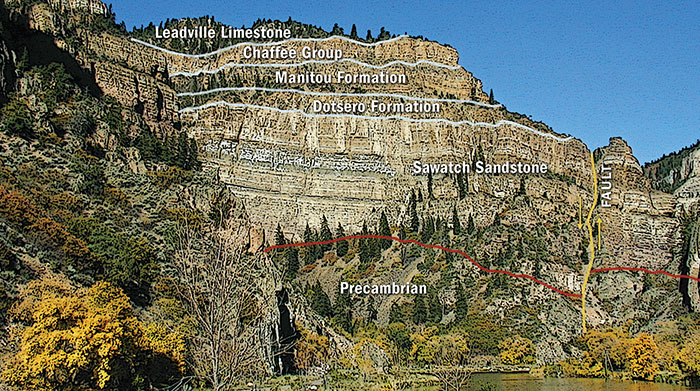 Taken looking east from the Hanging Lake Rest Stop. Igneous rock – such as the granite found here – formed as molten rock cooled and crystallized. Metamorphic rock – such as schist and gneiss – arose from the transformation of preexisting rock through high temperature and/or high pressure.

Colorado Mountain College is located in 11 mountain towns and has more than 80 degree programs to choose from.