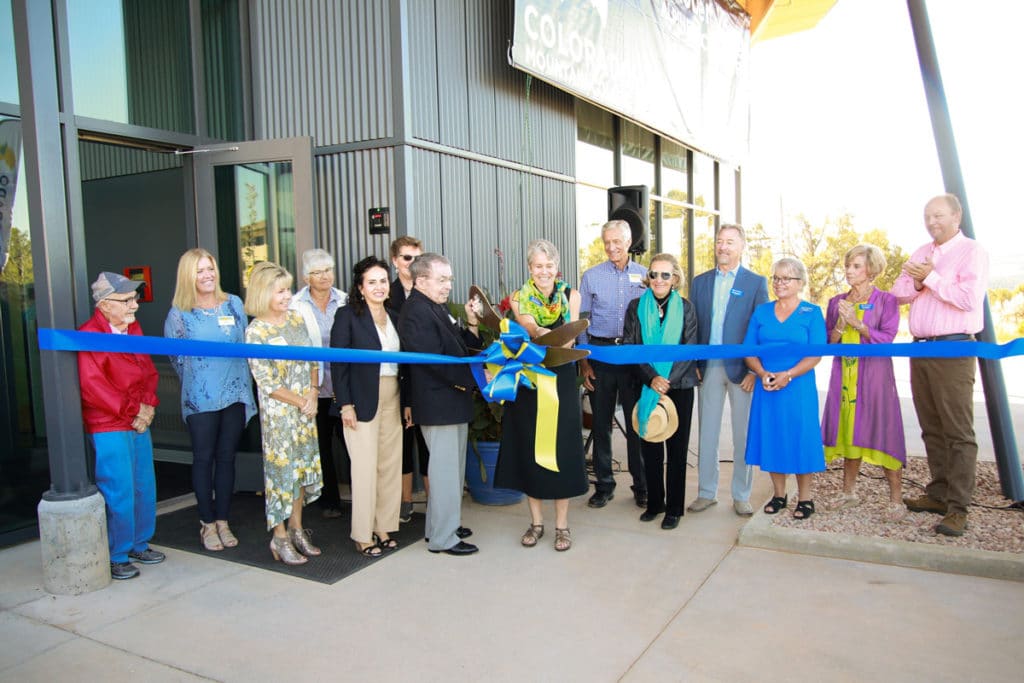 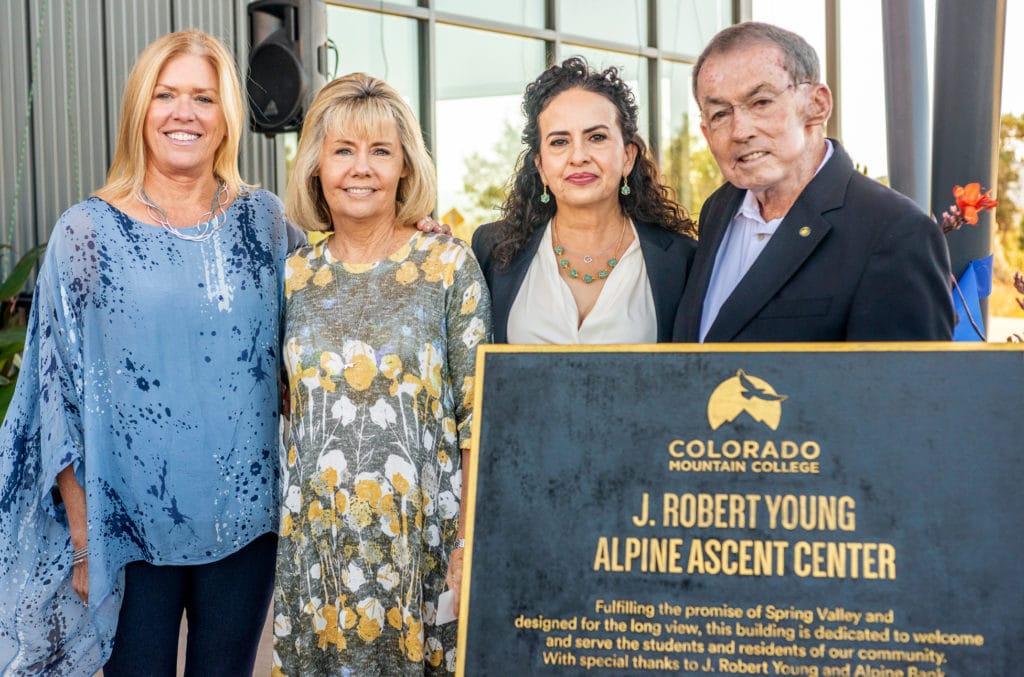 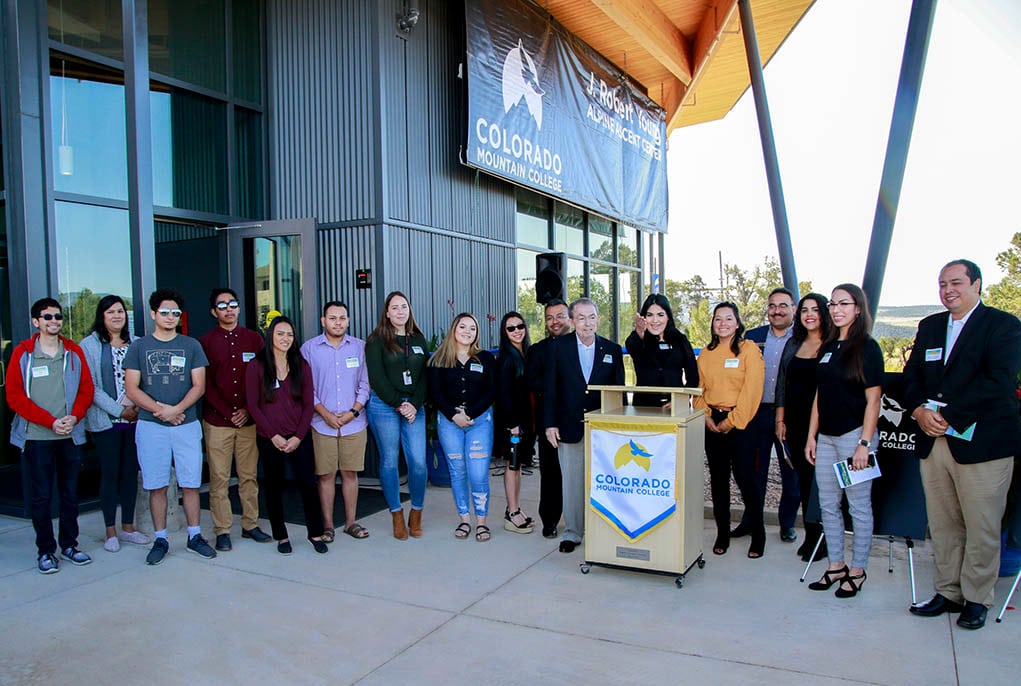 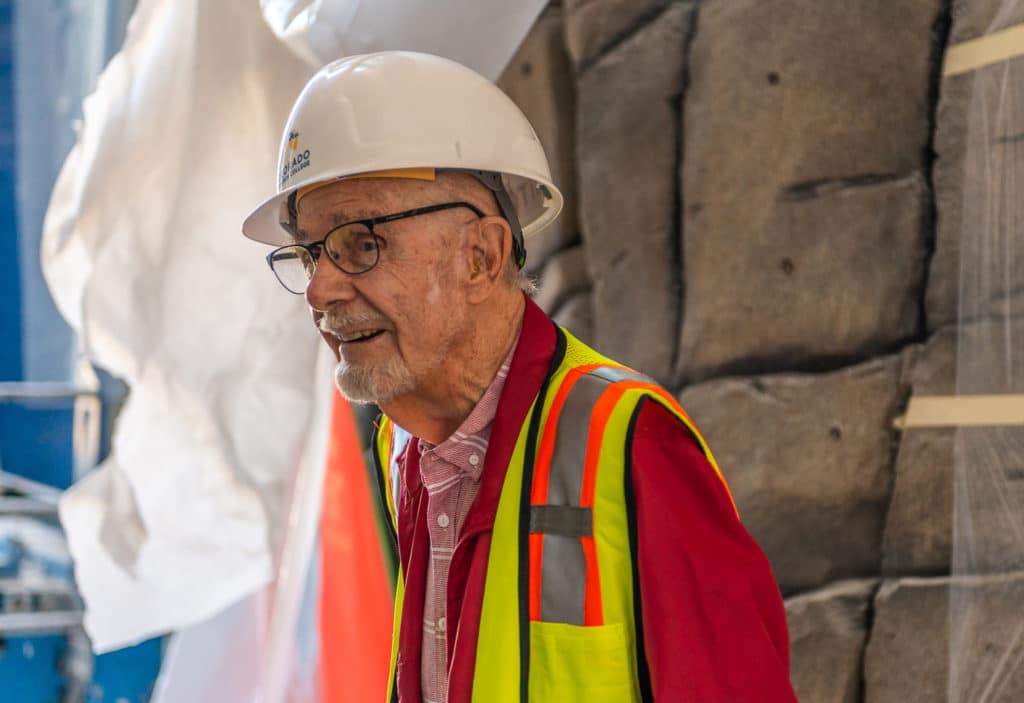 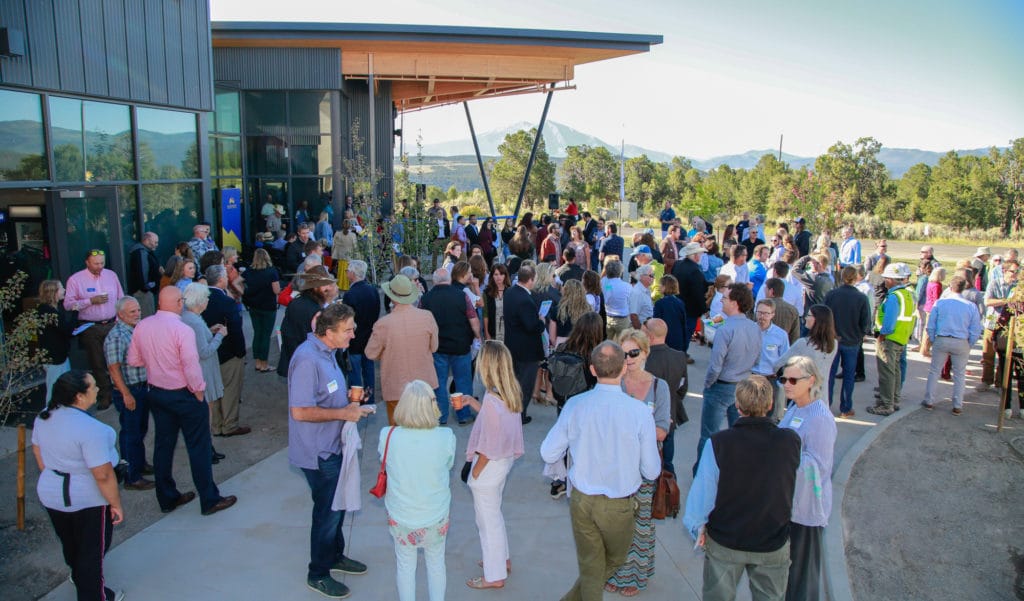 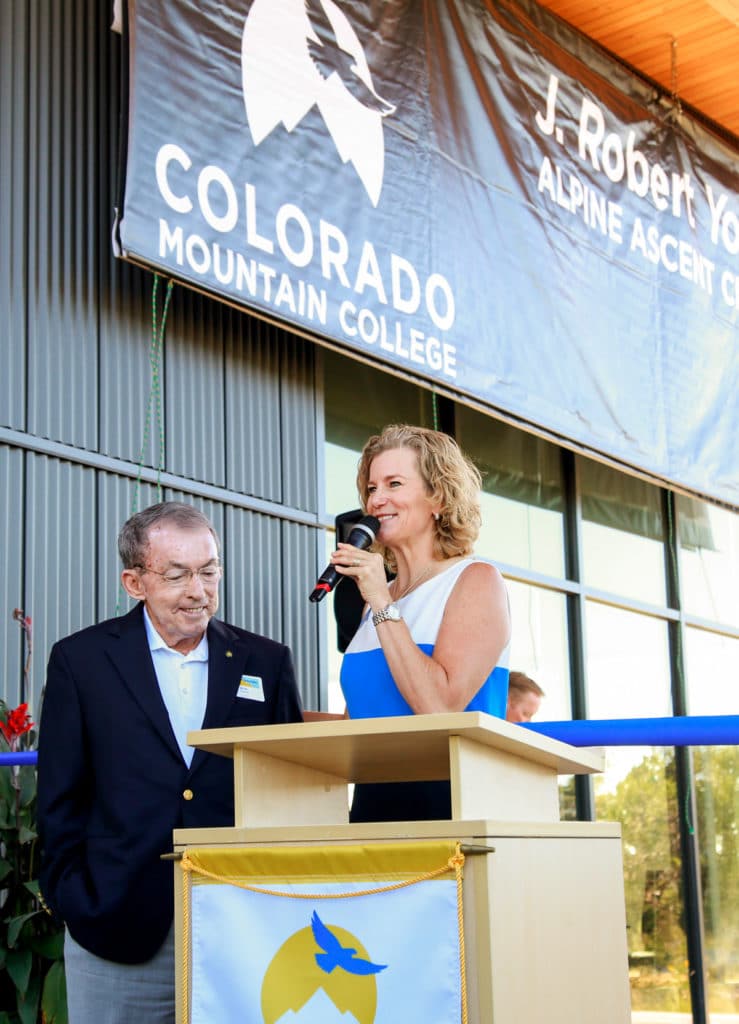 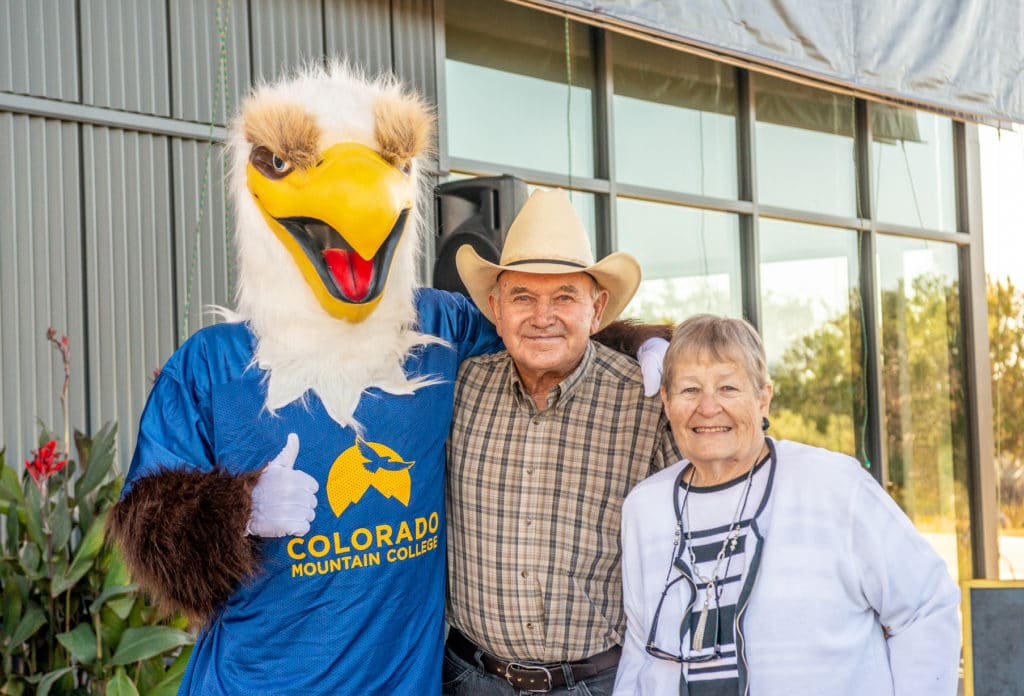 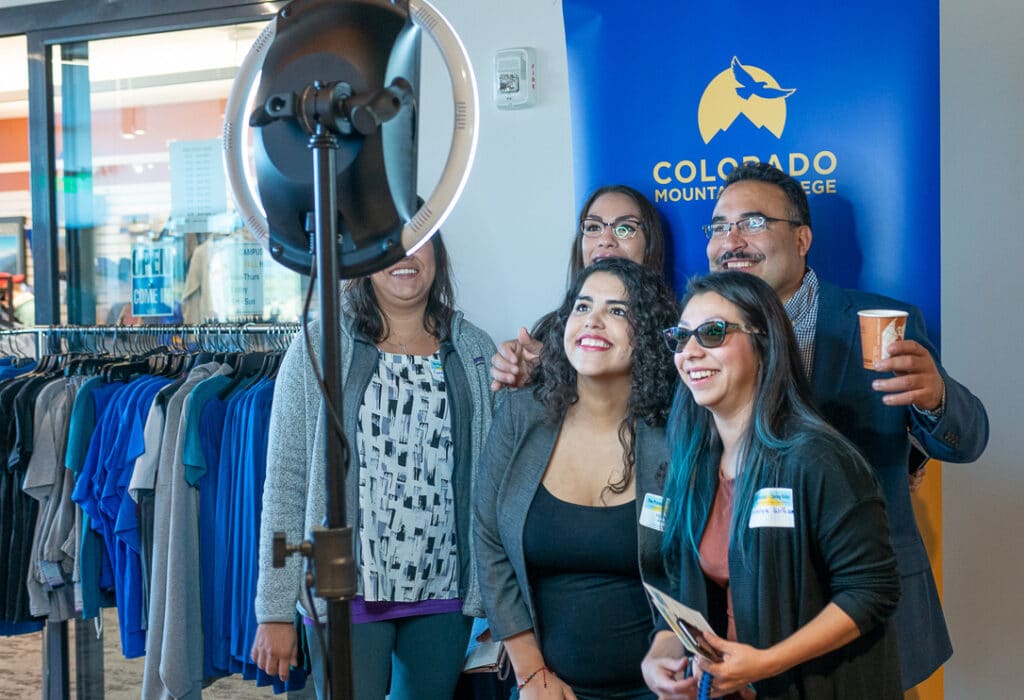 The Colorado Mountain College Spring Valley campus sits on over 800 acres of land gifted to the college by local ranching families, more than 50 years ago.

On Wednesday, two new buildings were dedicated at the campus: the Alpine Ascent Center, which will bear the name of local philanthropist and Alpine Bank founder Bob Young, in recognition of his support of CMC; and a second building, a new Outdoor Leadership Center & Field House.

Standing outside the J. Robert Young Alpine Ascent Center Wednesday morning, CMC President Dr. Carrie Hauser greeted students, alumni, employees and friends who gathered to celebrate and learn of the naming gift made by Young. “This building is a place of welcome, and a ‘one-stop shop’ to support students from their first day on campus through to graduation,” she said.

“And so it is most appropriate and humbling that Bob Young – one of Colorado’s most welcoming entrepreneurs, who has grown his business alongside CMC to serve our ever-changing communities – has honored us with a lead gift to support our capital campaign, launching the next chapter and a bright future for this beautiful campus,” Hauser said.

Colorado Mountain College has a long-term relationship with Alpine Bank and the Young family, dating back over 46 years to when the bank was founded, said Young. “We felt that the college and the bank would create an excellent partnership as we serve a similar geographic region,” he said. “Notably, my three daughters are CMC graduates. We are so proud of CMC and have never once regretted investing in this excellent institution. Alpine Bank and the Young family are happy to be part of CMC’s success.”

Also attending the event was CMC’s “founding father” David Delaplane and his wife, Anne, and members of the ranching families that were original donors of the Spring Valley land, including Jim and Sharon Nieslanik and Marianne Quigley Ackerman.

Also invited to show their support of Young were current and past Alpine Bank Latino/Hispanic Scholars, representing the approximately 240 scholarship recipients since Young started the program in 1996. In addition he and his bank have sponsored scholarships for hundreds of other students attending CMC and other postsecondary institutions throughout Colorado over the years, helping to prepare the workforce in the Colorado communities the bank serves.

Young’s financial pledge in support of the building marks a major milestone in the campus’s $5 million fundraising campaign, The Promise of Spring Valley – Designed for the Long View. Carbondale resident Paul Bushong was also recognized for his support of the campaign.

The J. Robert Young Alpine Ascent Center, which was open for the Aug. 26 start of classes, is a new student services hub. It now serves as a main point of entry and welcome for the campus, as well as the starting point for prospective students. It contains a new campus store and coffee shop, as well as versatile classrooms and meeting spaces – including a gathering space featuring a fireplace.

The Outdoor Leadership Center & Field House, which is in the final stages of construction, is designed to both serve the campus and to be a premier destination in the valley for community members and visitors. “In the same vein as the college’s Morgridge Commons in downtown Glenwood Springs, it is a gift back to the community and a gathering space for larger groups,” said Hauser.

The field house features a double-court basketball and volleyball gymnasium that can be configured to have a seating capacity of 990 – with the best view of Mount Sopris in the valley. In addition to sharing that view, the indoor track and cardio fitness mezzanine overlooks the campus’s extensive soccer fields.

Other fitness spaces in the field house include a weight room, flexible-use class/meeting room, multipurpose space for such things as indoor cycling, and climbing walls for both bouldering and roped climbing. Under a 39-foot ceiling, the climbing wall is one of the tallest in western Colorado.

A new concessions stand and restroom facilities will be available to support daily recreation and special events use, and storage for outdoor equipment will have its own corner of the building. The Outdoor Leadership Center & Field House will open for public use – including meeting and conference room spaces – later this year, with a soft opening this fall for CMC students.

Also underway is a major renovation of the Summit Student Commons, which will feature an expanded two-story dining hall, and meeting and activity spaces for both residential and commuter students. To find out more about supporting the capital campaign or for memberships in the new field house, contact the CMC Foundation at 970-947-8378.

Robert (Bob) Young is the chairman and founder of Alpine Bank. Originally from Wichita, Kansas, Young graduated from Wichita State University in 1961 and went to work for the FDIC as an assistant bank examiner. He moved to Denver in 1965 and served as executive vice president of FirstBank of Colorado, directly supervising subsidiary banks, including FirstBank of Vail, which he opened in 1968. During his time with FirstBank, Young completed the Graduate School of Banking at the University of Wisconsin and served on FirstBank’s board of directors until 1997.

In 1973, Young and his friend Bill Vollbracht and several investors began what is now known as Alpine Bank in Carbondale, Colorado. The bank has since grown into an organization that operates 40 locations in Denver, Boulder and throughout western Colorado, serving 145,000 customers. Since founding Alpine Bank, Young has emphasized philanthropy and community involvement. In addition to the hundreds of students who benefit from the Alpine Bank Latino/Hispanic Scholarships that Young started in 1996, he has also established a legacy gift to benefit future CMC students. He served on the Colorado Mountain College Foundation Board from 1999 to 2004, and continues to be a consistent, dedicated supporter of Colorado Mountain College and its students.

In 1988, Colorado Gov. Roy Romer appointed Young to serve as chairman of the State Banking Board.  He served on that board for more than 17 years, having been reappointed numerous times by both Democrat and Republican governors. He stepped down in 2007. He was named Colorado’s Outstanding Philanthropist in 1995. In 2006, he received the Athena Award from the Glenwood Springs Chamber Resort Association for his support of women's causes and women in the workforce. This is an international award and fewer than 5 percent of its recipients are men. Young was recognized by the U.S. House of Representatives in 2008 as a result of being named a 2008 Benefactor of the Year by the Council for Resource Development.

In 2009, Bob Young was among the first three people to receive an honorary associate degree from Colorado Mountain College, alongside fellow philanthropists Jim Calaway and Jessica Hobby Catto. Wichita State University, his alma mater, bestowed Bob with their highest honor, the WSU Achievement Award in 2015. And in 2019, Club 20, a Colorado Western Slope political organization, recognized Bob’s numerous contributions to the Western Slope with the John D. Vanderhoof award.