The show must go on, even in the time of COVID-19, so Sopris Theatre Company at Colorado Mountain College is going online with its first production of the season, “Rogues’ Gallery.” A collection of monologues by Pulitzer Prize-winner John Patrick Shanley, the show opens virtually Nov. 6 and centers on nine unforgettable characters, each with a startling or darkly humorous story to tell.

Orchestrating a live performance, and filming it for online viewing, has been a fresh challenge for Brendan Cochran, CMC graduate and director of the production. “At this point, we’re trying to preserve the theatricality of the safe, shared space,” he said. “We’re playing into the idea of a bare interrogation room.”

To that end, only one camera will capture the actors performing live, and the minimal set will result in a shared, stark, gray backdrop. 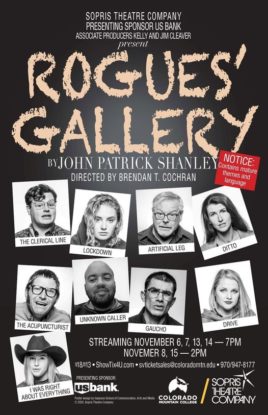 Sopris Theatre Company at Colorado Mountain College is going online with its first production of the season, “Rogues’ Gallery.”

The cast of “Rogues’ Gallery” has rehearsed individually on a staggered schedule, following physical distancing and face covering restrictions.. The plan is to film the monologues over two evenings at CMC’s New Space Theatre at Spring Valley, where one actor at a time will take the stage to create a one-take, filmed performance. The crew will have face coverings at all times and the actors will wear face coverings any time they are not actually recording their piece.

“The key is to stay flexible,” Cochran said, noting that both cast and crew are ready to pivot and capture video from remote locations if necessary.

“The beauty of doing a monologue show like this is we can keep people safe while involving a fairly large group,” said Brad Moore, CMC theater operations manager and adjunct instructor. “It provides a way for us to create art together in a global pandemic.”

“I think it’s a perfectly human piece,” said Cochran. “The script is reflective of our current experience of feeling trapped in little boxes on a screen. A lot of self-reflection can come out of staring at ourselves all the time.”

For actors, Shanley’s monologues offer a rare opportunity to strengthen the core tools of their craft. CMC theater program graduate Willey said that the structure of this piece invites intense, one-on-one collaboration with a director that’s unusual, especially in a larger cast production. Currently at work on her own one-woman show, Willey said, “It’s such a valuable experience to go deep with a script and a director like this.”

Kenning, who studied theater at the University of Denver and with the Stanislavsky Summer School in Cambridge, Massachusetts, agrees. “Because a monologue is all you have,” she said, “you become a detective working with the director to uncover the missing information surrounding your character.”

The process, she said, gave her time up front to “focus on the words and intentions of the character without having to think about movement right away.”

Moore noted at least one more blessing of the virtual theater experience. “We can safely reach audiences across all our campus locations, without anyone having to leave home,” he said.

Season tickets are available at Eventbrite.com or by sending an email to svticketsales@coloradomtn.edu. Single tickets are on sale only via ShowTix4U . “Rogues’ Gallery” contains adult content for mature audiences. Streaming will begin promptly as scheduled on Nov. 6, 7, 13 and 14 at 7 p.m. and Nov. 8 and 15 at 2 p.m.