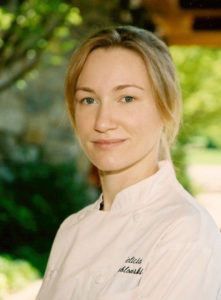 Chef Instructor Kalaluhi came to Vail from her job as Executive Pastry Chef at The Garden City Hotel. After working at The Lodge at Vail and The Cascade, she struck out on her own and opened Cornerstone Chocolates and Confections. Also of note, she competes yearly in the CASA Gingerbread House Competition and has built a walk-in gingerbread house for kids at The Four Seasons Hotel.

Chef Instructor Kalaluhi is endless. She is industry driven and pushes students to find real-life situations in the classroom environment. She is a craftsman and creator at the highest level and dazzles students with her skills and a few simple ingredients. 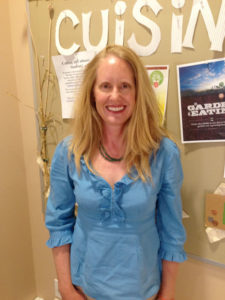 Chef Instructor Steiner has been working in the food service industry in the Vail Valley for the past 17 years. She has worked many positions from Restaurant Manager to Executive Chef. Currently, she is a purveyor for Northeast Seafood as well as teaching at CMC.

Dani is what students and friends call her. She is the guru of all things restaurant and finds ease in both front of house and back of house restaurant operations. Her strength is helping students realize that customer service is the most important skill in a restaurant. You have no legs to stand on if you can’t maintain healthy relationships with staff, purveyors and customers.

After a particularly large and somewhat dangerous fire at the Vail maintenance building in the late 70’s, those of us volunteering for the fire department thought we might need more training. Steadfast in our conviction, we went to the CMC A-frame by Gore Creek between Vail and Lionshead and worked together to start a fire science degree program.

It seemed like a good idea at the time as we had enough advanced degrees in our ranks that we could teach classes as well as attend others. Collectively we could learn to be better firefighters and get an associate degree in the process.  Pretty straightforward from our point of view, after all - we were firefighters and we had a training room in the firehouse. Administratively however, it was a laborious process of applications, paperwork, credentialing and more paperwork.

Ironically, most of the early fire science archives were lost to water damage.  Remember, the CMC A-Frame building was next to the creek, a creek prone to spring runoff.  Early on, the joke was that it took 4 years for a BA and 11 years for an AAS from CMC, especially if your records were “displaced”.

To everyone’s credit - literally, and in CMC’s tradition of truly helping students, firefighters who had lost their paperwork were allowed to test out of most courses they had previously taken in route to their degree.

What we learned in the college-level fire science program was invaluable.  Everyone associated with its initial inception benefited from what is today an important program to firefighters and their communities throughout the region and beyond. What is true for the fire service, as in most disciplines - education is critical to advancing endeavor.

From those early days at the A-frame, CMC has always supported the first responder with a commitment to education.  And now even more with the advent of the Starting Hearts First Responder Scholarship Program – “first on scene and first in our hearts.”

When I moved to the USA in 1999 I did not speak any English. At first I felt very frustrated. I started to work most of the time with two part time jobs for Eagle County School District as a cook Monday-Friday mornings, custodian in the afternoon, and cleaning houses and offices at nights and weekends.

As full time mom and housewife with three jobs I did not have enough time for myself. Time passed until my older son Gerardo invited me to take some classes. I started my education at Colorado Mountain College in Edwards getting my GED Certificate in 2004. Then I took some English classes. It was wonderful for me to be a student because I knew that it's never is late to learn.

I am still learning. In 2015 I got a Psychology/Social Work Certificate, and in January 2017 I'll start with more classes to get my Colorado Social Work license.

Colorado Mountain College is a great opportunity for all people with a desire to learn. I love all the time spent at the college for all the opportunities offered and for the assistance I received from teachers, counselors, and the whole staff. I am grateful to my husband for his support, thankful to my children for their help and patience. Special gratitude to all my English teachers at CMC for their time and all their counsel on my English learning.

Two years in, Rachel Weiss is flying high at Cambridge University. Good grades and great SAT scores helped her land at the prestigious school in England. But more than those was the boost she received from dual enrollment in Colorado Mountain College courses while she was a student at Battle Mountain High School in Edwards.

Getting to Cambridge wasn’t easy, however. According to the British newspaper The Guardian, fewer than 3,400 undergraduates are accepted to Cambridge among the 16,000 candidates who apply annually.

It’s even more selective for American students. In 2013, out of the nearly 300 American students who could even qualify to apply to the university, just 23 were admitted. To merely be considered, Cambridge demands from its American applicants the best grades from high school, the highest marks on SAT exams, and a minimum of five exemplary College Board Advanced Placement scores.

Knowing about the fierce competition, Weiss turned to Colorado Mountain College and its concurrent enrollment classes to help her realize her dreams to study abroad. British colleges run on a very different model than ours, and don’t usually accept students straight out of high school, Rachel explains. Her associate degree from CMC helped her over that hurdle.

The CMC classes were offered online, so they were easy to fit into her busy high school schedule. Rachel graduated from CMC in 2015 with a 4.0 GPA.

Rachel is in her second year of a three year program at Christ’s College, Cambridge, concentrating on psychology and behavioral science. Founded in 1505, Christ’s College is the alma mater of Charles Darwin, father of the evolution theory, and poet John Milton.

Cambridge has also been an adjustment. “We have lectures. I don’t have one professor, but different ones for different topics. We have to do a lot of outside reading on our own,” she said. She meets once a week with her supervisor who is an expert in her field of study. “He makes sure I’m on the right track.”

Grades are based on only one test, at the end of the year. “It’s a lot of stress,” she said.

She also pursues her passion for theater, which she honed in high school.

“There’s a huge theater scene at Cambridge,” she said. Summers spent at the famed Second City comedy club in Chicago, and at Northwestern University studying comedy and improvisation, have served her well. She is now president of the Cambridge Impronauts, a comedy troupe made up of students and local performers who offer unscripted, unrehearsed shows based on suggestions from the audience.

Theater and psychology seem to complement each other. Psychology, she said, helps her get into a character’s head.

After graduation, Rachel hopes to get work in her field and then pursue a master’s degree, either in Chicago or London. And continue in theater. Ultimately, she hopes to become a psychology professor.

Many people dream of changing the world. Rebecca Kanaly is taking it local, creating sustainable change in Eagle County and the communities she loves.

“As CEO, I draw on every single lesson I learned in every single class at CMC and DU, from accounting, philosophy, economics and marketing to upper level concepts like business strategy and social entrepreneurship,” Rebecca says. “I love applying my education and experience to change lives…to lift my neighbors out of poverty, to offer them hope and opportunity, to feed, shelter, and protect them in times of crisis, to prevent suicide and substance abuse, and collaborate with other community leaders to affect profound change.”

Her favorite class at CMC was Sustainable Economics with Mercedes Quesada-Embid, where she learned about the opportunities and corresponding responsibilities of impacting lasting and meaningful change on an entire system or community. She was also deeply impacted by the CMC online curriculum and Dr. Susanna Spaulding, who introduced Rebecca to corporate social responsibility and change leadership.

“I left CMC with a personal commitment to devote my work to positively impacting lives,” Rebecca said.

Rebecca is also quick to thank the donors who created the scholarships that allowed her to pursue her degree. She received a HERO scholarship which funded her senior year through the Gerald Gallegos Foundation. She also received several other scholarships from the CMC Foundation. With support from teachers, staff and others, Rebecca graduated at the top of her class, is in the CMC Hall of Fame and also belongs to Phi Theta Kappa Honor Society.

Her advice for other students is pretty simple: show up to every class and really participate, even when difficult life circumstances try to get in the way.

“Persevere, don’t hesitate to express your opinions, and ask many questions,” Rebecca says.

Next on Rebecca’s list is a doctoral degree. “I want to synthesize my education and experience in a way that helps to advance the entire industry of social/collective impact. I am excited about the possibilities.”