Curious about deer and elk hunting but don't have family or friends to get you started? Learn basic and advanced hunting skills and techniques with instructor Dave Levine, this summer at Colorado Mountain College Glenwood Springs. His classes are open to all skill levels and can be attended both in-person or online via livestream.

Introduction to Elk and Deer Hunting

This course is designed to be a safe and inclusive environment for newer hunters to learn more about what’s actually involved in elk and deer hunting in Colorado. A combination of lecture and facilitated group conversations will address the physical, mental and emotional aspects of big game hunting. There is no firearm handling or training in this course.

You’ve hunted a little bit and know you really want to do it or have taken a hunter safety course and now you’re ready to plan your DIY Colorado hunt. This course explores the pros and cons of common big game hunting approaches such as base camp, drop camp, spike camp, bivy and day hunting so you can maximize your enjoyment and success in the field.

Elk and deer hunting can be simplified into three phases; finding animals, taking the shot and after the shot. With Colorado’s big game hunting seasons spanning from summer to winter, considerations for each phase of hunt changes considerably. This course covers strategies, tactics, gear and planning from summer seasons like archery and muzzleloader through wintertime 4th rifle season hunts.

Go to our Community Education page in the link below and search for the class name to register.

Students from all CMC campuses will come together at CMC Spring Valley during Math Awareness Week from April 18th - 23rd to compete for over $2000 in contest prizes, including a $500 CMC Scholarship! See schedule below:

Kudos to the students in the Isaacson School graphic design class who created the amazing superheroes you can see on the posters all over campus: The Incredible Calc, Dr. Stat, Black Coffee, Captain Algebra, Pi-Da Man and Imaginary Man.

If you have questions regarding Math Awareness Week, please contact Professor of Mathematics, Jason Vargas at jvargas@coloradomtn.edu. 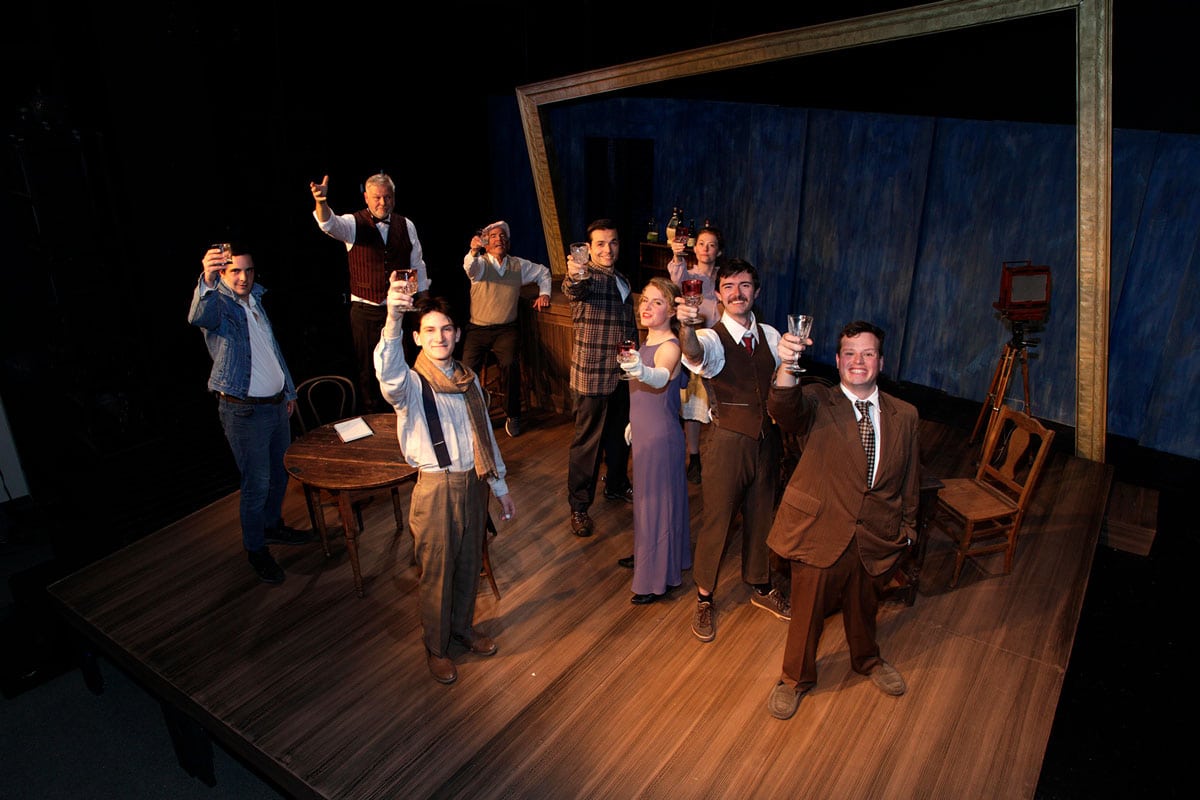 Sopris Theatre Company is presenting its final production of the season, "Picasso at the Lapin Agile," opening April 8 at the Spring Valley campus of Colorado Mountain College. This off-Broadway hit by comedian Steve Martin places Einstein and Picasso in a French café in 1904.

Both are on the precipice of major discoveries: Einstein's theory of relativity and Picasso's cubism. Over drinks, the two geniuses cover topics ranging from the most important achievements of the past century to the subversive silliness at the core of human creativity.

The play explores both the source of their inspiration and the parallels between science and art without dreary intellectualism. Instead, the writing maintains a zany flow with a sly undercurrent of cultural examination.

CMC theatre graduate Joshua Adamson portrays Einstein, while current student Wyatt Tulk tackles the role of Picasso. Both noted they learned something about physics while memorizing their lines.

"It really blew my mind to think about time as movement and change," said Adamson.

Although "Picasso at the Lapin Agile" is often described as a smart play, it's not didactic.

"When I tell my friends what this play is about, I say, think 'Cheers' but with absurd writing and characters," Tulk said.

"It's Einstein and Picasso walk into a bar," added Hattie Rensberry, who plays the roles of Suzanne, Countess and Female Admirer.

"You have all these people from different walks of life," Wilson said. "A scientist, a painter, a singer − and Steve Martin finds a way of indirectly saying we're all connected. It fascinates me how he shows that a mathematical formula can be music, or how it can be a painting, how science can be beautiful, and art can be analytical."

Season presenting sponsor for "Picasso at the Lapin Agile" is US Bank. Tom Buesch is the show's producer with associate producers Kelly and Jim Cleaver, and Dori and Robert Libson. Tickets are $20 ($15 for seniors, CMC students and employees).

Colorado Mountain College’s sustainability studies program will host its sixth sustainability conference from 9 a.m.-12 p.m. on Earth Day, April 22. “Be the Change,” will be accessible via Zoom throughout CMC’s nine-county district and beyond. The conference is free and the public is welcome and encouraged to register and attend.

Matt Hamilton will provide the keynote address, discussing his perspectives on leading sustainability efforts within the business sector. Hamilton spent nearly 14 years with the Aspen Skiing Company first as sustainability coordinator, then sustainability manager, and finally, as director of sustainability.

Hamilton is now the director of corporate sustainability at VF Corporation, one of the largest apparel, footwear and accessories companies in the world focusing on socially and environmentally based operations and products.

The 123-year-old corporation has 12 brands including The North Face, Vans, Smartwool and Timberland. Hamilton said that VF Corporation produces 400 million units of apparel, footwear and accessories every year, and “As practitioners, we’re able to influence and help reduce environmental and social impacts by producing sustainable products,” he said.

The conference will also feature CMC President Dr. Carrie Besnette Hauser, who will describe the college’s educational and operational visions regarding sustainability.

Additionally, graduating sustainability studies students will give brief research presentations in five breakout rooms. Virtual attendees may select which breakout room to visit: 1) biodiversity as goal and solution; 2) social justice and education; 3) infrastructure for transformation; 4) food and the future; and 5) rivers, fire and climate action.

Spots for the virtual conference are filling fast. And following the conference, three CMC campuses – at Vail Valley at Edwards, Steamboat Springs and Spring Valley – will host Earth Day celebrations that will be free and open to the public.

The Steamboat campus's activities will run from 12:30-3 p.m. outdoors in Bear Park at the Growing Dome and will feature live music, speakers, free food and hands-on fun.  The Edwards's campus will feature "Food for Thought" from 2-3 p.m. with a panel discussion moderated by Professor Kim Langmaid, student capstone research posters, induction cooktop cooking demonstrations and sustainable snacks. The Spring Valley campus's event will run from  2-4 p.m. and will include physical poster presentations, coffee and snacks, and live music from Carbondale musician Olivia Pevec.

For more information about all the on-campus activities and to register for the virtual conference, visit CMC 2022 Sustainability Conference: Be the Change. 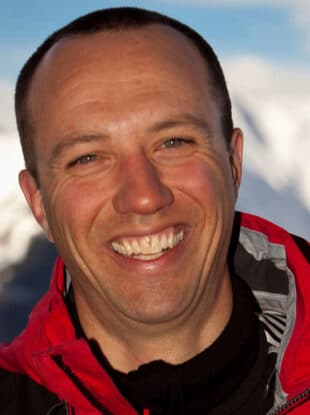 Matt Hamilton, director of corporate sustainability at VF Corporation, will give the keynote address at CMC’s online “Sustainability Conference 2022: Be the Change” on Earth Day, April 22. The event is free and open to the public. 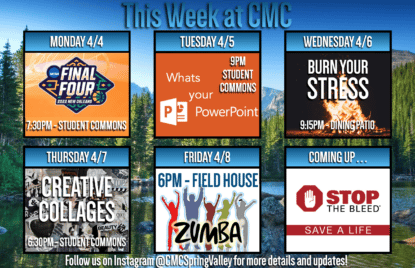 Monday – Watch the thrilling end to March Madness as Kansas and North Carolina face off to win the National Championship!

Tuesday – Create your own hilarious and fun power point for a random person to present. Bring a laptop with your funny power point!

Wednesday – Feeling stressed? Take a break and burn that stress away!

Thursday – Join us to make your very own creative collage to inspire your dreams and goals!

Friday – Kick the weekend off with a high energy Zumba workout!

Making up the difference

An estimated 200 Colorado Mountain College degree-seeking students will not have to pay tuition starting this fall, thanks to a new financial program called the Colorado Mountain Promise. These students, who had previously been unable to bridge the gap between aid offered and their tuition costs, will now be able to receive the support they need to pursue their education.

The Colorado Mountain Promise is based on the premise that every Colorado resident deserves the opportunity to attend college. All students in the program must initially complete a Free Application for Federal Student Aid or a Colorado Application for State Financial Aid. The program uses a combination of federal, state and institutional funds to pay students’ tuition.  Once programs such as the Pell Grant, Colorado Student Grant or College Opportunity Scholarship Initiative, are utilized, CMC will pay any remaining tuition costs.

Shane Larson, CMC vice president of student affairs said that while many students receive Pell Grants that can cover their cost of tuition, there are students who just miss qualifying and do not receive any grant aid. These students are often still low income and in need of support but the government’s calculation for Pell eligibility excludes them. The Colorado Mountain Promise is designed to help students who may have some aid, but not enough to cover full tuition costs.

“We believe that students who just miss and don’t qualify for a Pell Grant are still high-need students in our communities,” said Larson.

“CMC is purposeful in looking for ways to increase student accessibility and break down the financial barriers to our in-district and in-state students,” said Janelle Cook, CMC director of financial aid. “Colorado Mountain Promise makes the overall cost of earning a degree attainable by assuring tuition is covered in full for students who qualify.