Imagine the making of our Mount Sopris into the beautiful icon that it is today. It looked very different - it wasn't a mountain at all - 66 million years ago:

These flat sedimentary layers are where the future mountain takes shape.

Extreme geologic forces were at work here around 34 million years ago. In layman's terms, think about how a blood blister forms and then think about it on a massive earth scale.

Magma, molten rock beneath the earth's surface, is the blood that blisters into the "skin" of the earth. This is called an igneous intrusion.

Magma from deep within the earth's crust was injected into the sedimentary layers. The result was a giant igneous dome covered by 10,000 feet of sedimentary rock.

Many people mistakenly believe Mt. Sopris was a volcano. Instead, the magma in Mt. Sopris never erupted; it crystallized 10,000 feet beneath the surface. 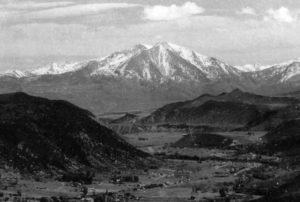 Who is Mr. Sopris?

Find out about the man behind the Mount Sopris name.