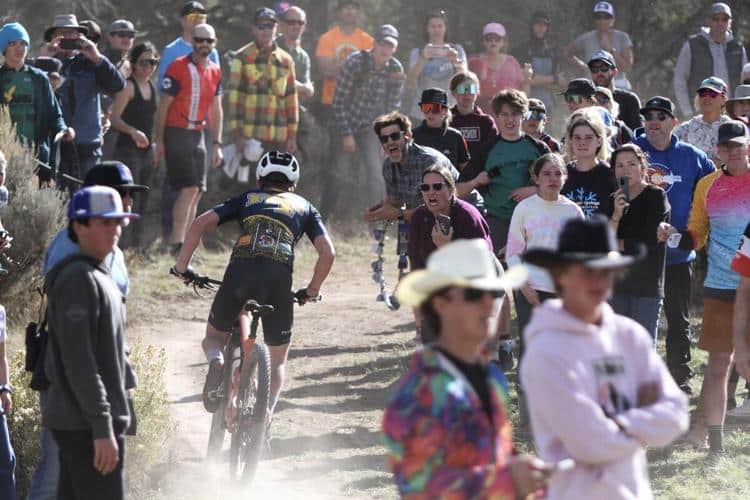 Fans cheer on Roaring Fork junior Sam Friday. About 2,000 people came to Glenwood Springs to compete in or watch the state championship. Photo by Rich Allen

For the first time in the league’s decade-plus history, the typically two-day state championship was condensed into one on Saturday in anticipation of inclement weather on Sunday. More than 800 riders took to the new mountain-bike course around the university from 7:45 a.m. to around 5 p.m., including four local teams.

Golay’s vision to bring the state championship to Glenwood Springs came to fruition after years of work, in what Glenwood Springs senior Chloe Lutgring called the largest state event in which she’s partaken.

“It far exceeded my expectations,” Golay said. “I’m so impressed with the league. I was in the interesting place representing the college but having a background in the league. ... The Spring Valley campus team was really graceful and open to bringing in this event.”

In 2021, the campus began work on renovations to the course for the completion of an all-skills course, with events like the state championship specifically in mind. Golay and the league’s Executive Director Kate Rau began discussing the possibility of bringing races to Spring Valley multiple years ago.