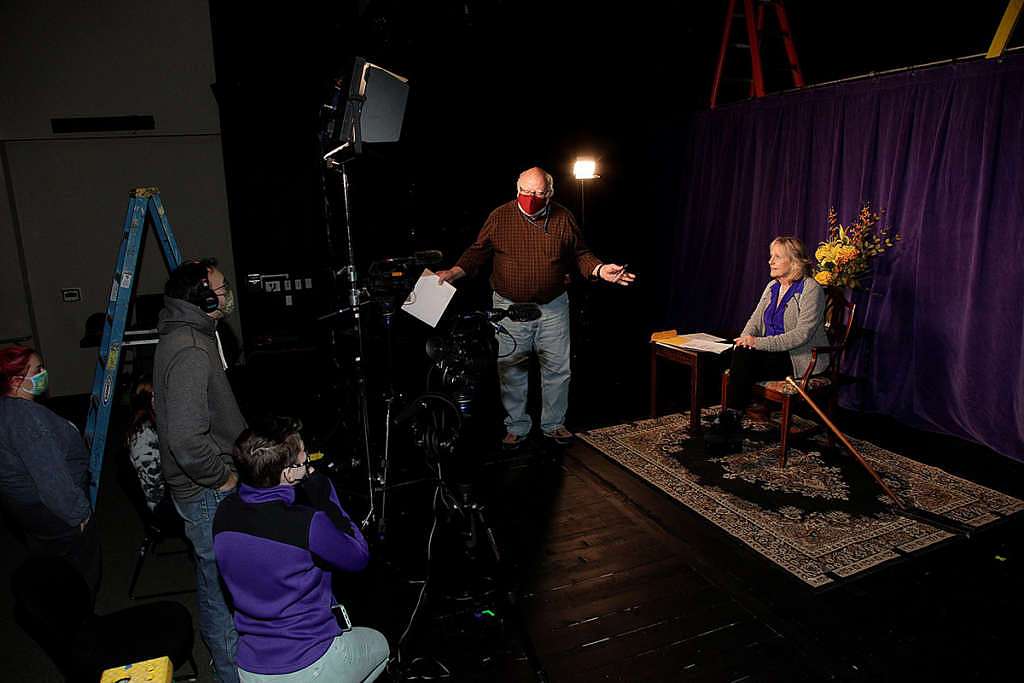 Forging ahead with theater in the time of COVID-19, Sopris Theatre Company at Colorado Mountain College is presenting a new virtual production, “Three Viewings.”

Written by Jeffrey Hatcher, the play was conceived as three monologues to be performed on stage for a live audience. But the script, in which three characters appear onstage together only for a curtain call, was also a perfect choice for online rehearsals and digital streaming during a pandemic.

“Three Viewings” explores three darkly comedic monologues set in a Midwestern funeral parlor: “Tell-Tale,” “The Thief of Tears” and “Thirteen Things About Ed Carpolotti.” The show opens Feb. 19, with CMC theater graduate Jesse Monsalve hosting a post-show, moderated discussion – from his apartment in Brooklyn! – with the audience each weekend.

Brad Moore, director of “Three Viewings,” theater operations manager of Sopris Theatre Company and CMC adjunct instructor, said the show was chosen because rehearsals and performances could be conducted safely, with physically distanced actors. “Doing this show virtually has had an unexpected up side,” he said. “The time we’ve had to explore the characters and the script, really pulling apart every word, has been a gift.”

The cast agrees that online rehearsals have been surprisingly rewarding. In “Tell-Tale,” Mike Monroney portrays Emil, a funeral director with a secret he’s held in plain sight for years. Monroney said the process has been very intimate and focused, despite the actors being miles away from one another. “We have no distractions, except for our dogs and Alexa,” he joked. “Because we don’t have to project to the back of a theater, we don’t have to force anything. We can play a lot of levels vocally.” 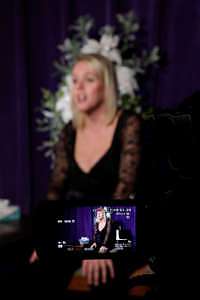 CMC theater graduate Paige Ulmer rehearses with the camera for "The Thief of Tears," one of three monologues in Sopris Theatre Company’s virtual production of "Three Viewings."  Photo Scot Gerdes

The cast and crew work together almost every day via Zoom, streaming from their offices, living rooms and bedrooms. “Being in my space helps me bring more of myself to the role,” said actor Wendy Perkins, who plays baffled widow Virginia in “Thirteen Things About Ed Carpolotti.”

“Whatever part I play is another version of my mother, and I’ve got a photo of her to inspire me right here,” she said.

In “The Thief of Tears,” CMC theater graduate Paige Ulmer portrays Mac, a young woman with baggage that makes her life hard to bear. “I appreciate being able to take notes from the director one on one, with no background noise,” she said. “In this new environment, I’ve let down some walls, and it’s amazing. It’s just a joy. I’m learning so much, maybe more than ever.”

The CMC student crew is advancing their skills too. As cinematographer, Colton Grove will run two cameras to create seamless transitions. President of the CMC Theatre Club, Midge Glidewell, will run the audio. Amanda Bryan is assisting with the costuming, and new student Marie Labrecque is the lighting coordinator.

Season ticket holders must call 970-947-8177 or email ticket sales to request their tickets. Single tickets are on sale only at ShowTix4U.