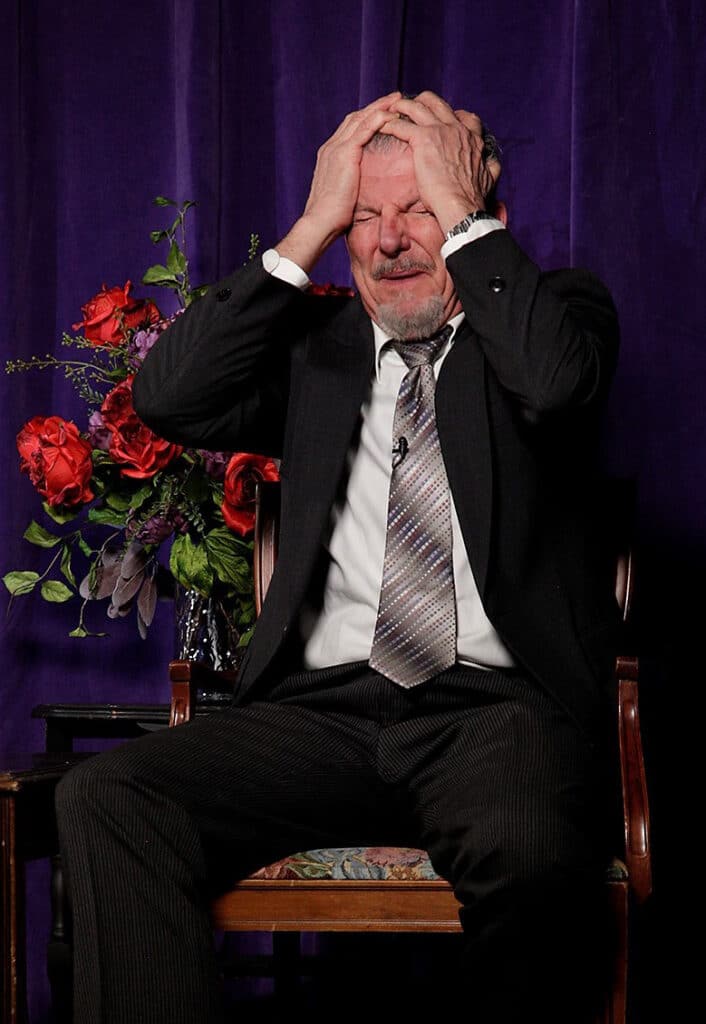 Mike Monroney as Emil, an undertaker with an unspoken passion for a woman in "Tell-Tale," one of three monologues in "Three Viewings," at the Wheeler Opera House Jan. 29-30.

What’s funny about a funeral parlor?

When Sopris Theatre Company at Colorado Mountain College premiered its production of “Three Viewings” by Jeffrey Hatcher last January, it was strictly through virtual performances. In fact, the company’s entire season was performed adhering to pandemic health protocols, distanced and without an audience. Rehearsals were held online and the actors performed the play via digital streaming.

When the actors perform “Three Viewings” at the Wheeler Opera House this Saturday evening and Sunday afternoon, however, it will be in front of a live audience, which to stage actors, of course, is an intricate part of the theatrical experience itself.

“Live theater is exactly that – live,” said Brad Moore, director of “Three Viewings” and CMC theatre operations manager. “The audience becomes the missing piece to the puzzle. Live performances are a unique once-in-a-lifetime experience. It may be the same show, but the audiences are different every performance and what they bring to the experience through their responses will only happen once.”

Moore said that the play was chosen last year not only because of its funny yet touching message, but because rehearsals and performances could be conducted safely, with physically distanced actors. Hatcher conceived “Three Viewings” as three monologues to be performed on stage for a live audience. But the script, in which three characters appear onstage together only for a curtain call, was also a perfect choice for online rehearsals and digital streaming during a pandemic – something the playwright likely didn’t consider when he wrote the play in 1996.

“Doing this show virtually has had an unexpected upside,” Moore said last year. “The time we’ve had to explore the characters and the script, really pulling apart every word, has been a gift.”

Cast member Mike Monroney, plays Emil, a funeral director with a secret he’s held in plain sight for years. Last January, Monroney said the process of preparing and performing the play virtually created a focused atmosphere. “We have no distractions, except for our dogs and Alexa,” he said.

This time around, Sopris Theatre Company is looking forward to all the thrills and challenges live theater brings. The company performs regularly at the 100-seat New Space Theatre on Colorado Mountain College’s Spring Valley campus near Glenwood Springs and brings one of its performances to the Wheeler Opera House each season.

“We are absolutely thrilled to be stepping onto the Wheeler Opera House stage again,” said Moore. “Despite its size, there is an intimacy to the venue that is perfect for this play. We are also able to give our student production team the invaluable opportunity to apply their learning with a skilled staff and on state-of-the-art equipment.”

US Bank is the season presenting sponsor, producers are Sharon Andersen and Alex de la Garza, and associate producers are Kelly and Jim Cleaver.